What's Burning Now?
Why Fuel Reduction?
Resources
About Us
Who is involved?
Program results
Forums
Contact

After the Tasmanian bushfires of January 2013 and the Royal Commission into the Victorian bushfires of 2009, the State Fire Management Council (SFMC) released 'Bushfire in Tasmania – A new approach to understanding our Statewide relative risk' found here.

'This report recommended a fuel reduction program that treats land based on risk, rather than who is responsible for its management.

In 2014 the Tasmanian Government then invested $28.5 million over for four years for an Australian-first scientific program of strategically targeted burns, to reduce the amount of potential fuel for a bushfire.

This cross-agency, whole-of-state Fuel Reduction Program focusses on those areas that pose the greatest risk of bushfire. An ongoing commitment to the program will reduce the long-term risk of catastrophic fires.

For the first time, this Fuel Reduction Program includes both public and private land. The Fuel Reduction Program is being overseen by the Bushfire Risk Unit within the Tasmania Fire Service. The unit is working with the Parks and Wildlife Service, Forestry Tasmania, local government, contractors and private land owners to implement the program. Parks and Wildlife Service and Forestry Tasmania will also be conducting their own burning programs. 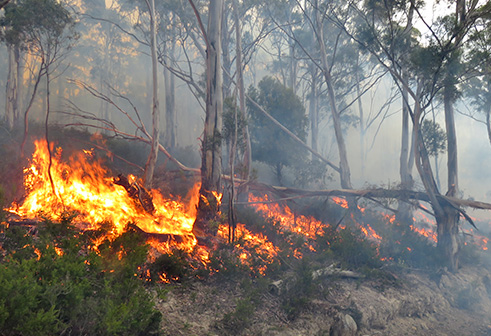 If you are deaf, hard of hearing or have a speech impairment, there are six ways of contacting emergency services.

If you find yourself in an emergency which is either life threatening or where time is critical, you can contact fire services, police or ambulance: